The United Nations on Monday denounced the ongoing military coup in Sudan and urgently called for the release of the country’s interim prime minister and other top cabinet officials.

In a tweet on Monday, UN Secretary-General Antonio Guterres said that Prime Minister Abdalla Hamdok and all other officials detained by Sudanese security forces earlier in the day “must be released immediately.”

“There must be full respect for the constitutional charter to protect the hard-won political transition,” Guterres wrote.

He added: “The UN will continue to stand with the people of Sudan.”

Sudan’s military seized power Monday, dissolving the transitional government hours after troops arrested the prime minister. Thousands of people flooded into the streets to protest the coup that threatens the country’s shaky progress toward democracy.

The takeover comes more than two years after protesters forced the ouster of longtime autocrat Omar al-Bashir and just weeks before the military was supposed to hand the leadership of the council that runs the country over to civilians.

The UN‘s political envoy to Sudan, Volker Perthes, echoed Guterres’ appeal and described the arrests of officials as “unacceptable.”

Perthes added he was “deeply concerned” about the “attempts to undermine Sudan’s political transition” to democracy following the ouster of longtime autocrat Bashir in 2019.

He urged all parties to “return to dialogue and engage in good faith to restore the constitutional order.” 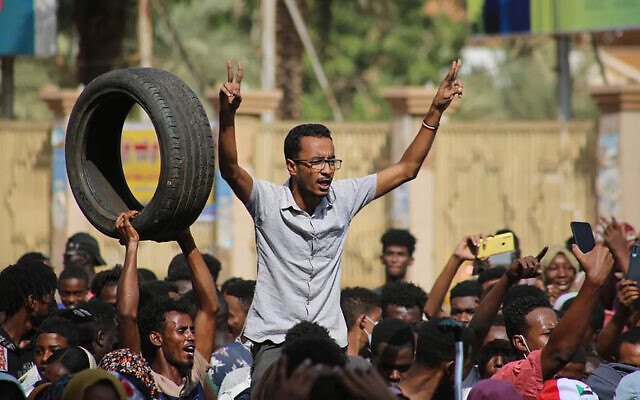 Thousands of pro-democracy protesters take to the streets to condemn a takeover by military officials in Khartoum, Sudan, October 25, 2021. (AP Photo/Ashraf Idris)

The United States said it was “deeply alarmed” at reports of the military takeover.

“This would contravene the Constitutional Declaration (which outlines the transition) and the democratic aspirations of the Sudanese people,” said US special envoy for the Horn of Africa Jeffrey Feltman in a statement on Twitter.

US diplomats in Sudan later issued warnings to American citizens in the country citing the military’s closure of areas in and around the capital and reports of violence against protesters.

The US Embassy in Khartoum urged Americans to “shelter in place” and “remain aware of their surroundings” hours after Sudan’s top general declared a state of emergency and dissolved the civilian government. Internet remained widely disrupted across the country and the embassy noted it was “non-functional” in Khartoum.

It asked that American citizens not travel to the US Embassy or to international airports in Khartoum or Port Sudan, where it said outbound flights were halted.

Germany condemned the reports, calling for an “immediate end” to the action.

“The news of a new coup attempt in Sudan is troubling,” German Foreign Minister Heiko Maas said in a statement.

RECOMMENDED POST  Qualifier: Neuer back for Germany against North Macedonia

“I call on everyone in Sudan responsible for security and order to continue Sudan’s transition to democracy and to respect the will of the people.”

South Africa said it was “deeply concerned about the apparent ongoing coup and attempts to undermine Sudan’s political transition,” calling for the immediate release of officials.

“We reject and condemn any attempt at an unconstitutional change of government,” the foreign affairs ministry said in a statement. 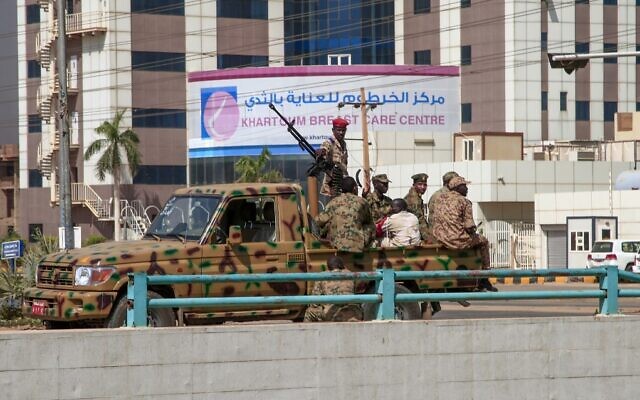 Sudanese security forces deploy in the capital Khartoum, on October 25, 2021, following overnight detentions by the army of members of Sudan’s government. (AFP)

Egypt urged all parties in neighboring Sudan to work to ensure “stability and security” amid the military takeover of the east African country.

Egypt, which shares access to the vital Nile River and a long southern border with Sudan, said that it was “closely following” the country’s tumult and emphasized the need to deal “with current challenges in a manner that guarantees the safety of this brotherly country.”

The statement from the Egyptian Foreign Ministry did not condemn the coup or express overt concerns like many Western countries have.

Instead, Egypt said only that it was urging Sudanese factions to “give priority to the higher interest of the country and to national consensus.”

The two most senior generals in Sudan have close ties with Egypt under its own general-turned-president Abdel Fattah el-Sissi.

The EU, meanwhile, called for the release of Sudan’s civilian leaders and insisted “violence and bloodshed must be avoided.”

“The EU is very concerned about Sudan’s military forces reportedly putting Prime Minister (Abdalla) Hamdok under house arrest, as well as detaining other members of the civilian leadership, and we urge for their fast release,” European Commission spokeswoman Nabila Massrali told journalists.

The EU’s top diplomat, Josep Borrell, said in a statement that the coup is a “betrayal of the revolution, the transition, and the legitimate requests of the Sudanese people for peace, justice and economic development.”

“The right of peaceful protest must be respected; violence and bloodshed must be avoided at all cost; we also urge communication networks to be open,” Borrell added, after thousands of protesters poured into the streets of the Sudanese capital, Khartoum, and its twin city of Omdurman, following the arrests. 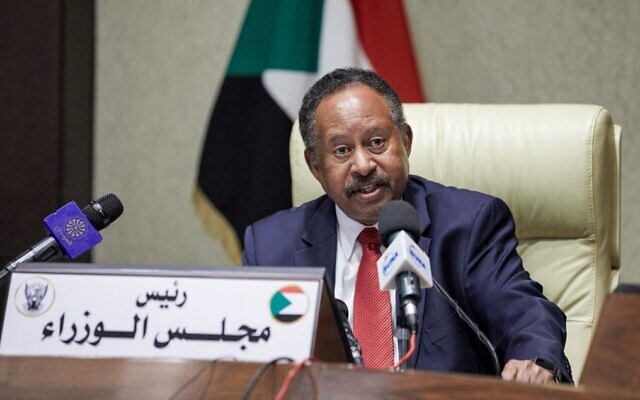 The Arab League urged all sides to adhere to an August 2019 power-sharing deal, as it sounded alarm.

“The Chairperson calls for the immediate resumption of consultations between civilians and military within the framework of the political declaration and the constitutional decree,” Faki said in a statement posted on Twitter.

The Intergovernmental Authority on Development (IGAD), which Sudan is currently chairing, said it was “alarmed” by the events in the country, and was “following the situation very closely.”

“The executive secretary strongly condemns any attempt to undermine the transitional government and urges all parties to exercise utmost restraint,” the regional African bloc said in a statement from Djibouti.

We give 500 Naira to pregnant women who deliver in primary healthcare centres – Gov. Ikpeazu boasts