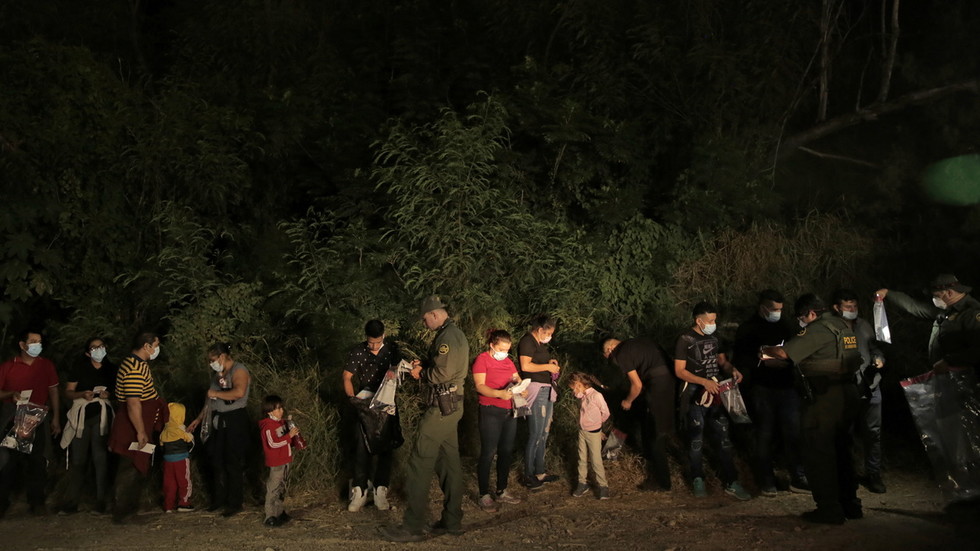 Roughly 160,000 illegal immigrants have been captured on the border with Mexico and then released into the US with almost no oversight, according to media reports based on leaked Border Patrol documents.

Of the thousands released back into the US, 30,000 that have been cut loose since August have been eligible for work permits as part of a parole system giving migrants temporary legal status, according to the records obtained by Fox News.

President Joe Biden’s administration has been under scrutiny for its handling of the border situation, as agents have faced record numbers of migrants attempting to cross. Critics have especially pointed to the fact that many of these migrants are simply released into the US with a notice to report later to authorities as problematic and potentially dangerous, especially during the Covid-19 pandemic.

Also on rt.com ‘Miss me yet?’ Trump trolls Biden with round-up of dire US news

Those with notices to appear are only required to check in with authorities when they reach their ‘final’ destination, wherever that may be in the country.

Some experts have blasted the Biden administration for too loosely giving out NTRs (Notice to Report) and awarding parole status.

“By law and regulation a parole shall only be granted on a case by case basis and only for significant humanitarian reasons or significant public benefit. Neither of these appear to apply to the current situation,” Rodney Scott, a former Border Patrol chief who served under Biden, told Fox News, adding that he had never seen more than a handful of paroles given out in a year.

Under federal law, parole for non citizens is done on a case by case basis, and only for “urgent humanitarian reasons” or “significant public benefit”. Former U.S. BP Chief Rodney Scott tells me he only granted 5-10 per year as a sector chief. Biden admin 31,977 did in 2 months. pic.twitter.com/8HPQYyjRFB

Notice to Report (NTR) is aimed at asylum-seekers and requires them to check in with an Immigrations and Customs Enforcement (ICE) office within 60 days. Most illegal migrants apprehended on the US-Mexico border try to claim asylum, counting on the Biden administration’s pledge not to deport them in that case.

Migrant encounters at the southern US border have continued to rise, with July and August seeing more than 200,000 apprehensions each. Over a million people have crossed over from Mexico illegally since Biden’s inauguration.

Also on rt.com DHS head admits 12,000 ‘or more’ Haitian migrants from Del Rio released BACK into the US

Critics have used the latest report on the chaos at the border to accuse Biden and his administration of ignoring the growing situation, and others pointed to the hypocrisy of Covid-19 vaccine mandates for American workers, while thousands of migrants are reportedly not even tested before being released.

WOW: Leaked Border Patrol documents show 160,000 foreign citizens have been released into the US since March.These documents prove that the border is WIDE OPEN, NOT SECURE, and DANGEROUS for our country.Secure the border now! https://t.co/KuprlF1wNn

“If you are really serious about ending a global pandemic you don’t release tens of thousands of unvaccinated people into the general population of the country. Were these people even tested for Covid prior to parole?” conservative commentator Matthew Kolken tweeted in response to the leak.

Biden supporters and liberal pundits have meanwhile dismissed the leaked documents and increased numbers of migrants released, saying it is “standard procedure.”

“Leaked Border Patrol”Is the Republicans going on a racist rant repeating pretty much the same thing they’ve said for 50 years.White America is being invaded by dark skinned people.

The “leaked border patrol” story is crap. Standard procedure – much required by court settlement ignored by the Trump – is to release those seeking hearings to family etc on reviews that determine they will return for removal hearing. Has always worked, & kept families together.