National Security Adviser Eyal Hulata reportedly visited France in recent days in an attempt to defuse a crisis involving the suspected use of Israeli spyware developed by NSO Group to hack the phones of French President Emmanuel Macron and other senior French officials.

Citing senior Israeli sources, the Walla news site reported that Hulata met at the Elysee Palace with Macron’s diplomatic adviser Emmanuel Bonne, with the crisis one of the central issues discussed.

According to the report, an international investigation that in July unveiled the alleged hacking caused a diplomatic rift and Macron called Prime Minister Naftali Bennett, who promised to investigate the matter. Days later, Defense Minister Benny Gantz flew to Paris and presented initial findings.

Walla reported that France has frozen a significant part of the diplomatic, security and intelligence ties with Israel over the matter until it is clarified, including halting mutual visits. Hulata has since been leading covert talks to defuse the crisis.

Hulata has reportedly presented additional findings to Bonne and proposed an Israeli promise that any future offensive cyber software deal with a third country will include a clause forbidding the targeting of French phones numbers, similar to deals already in place with the United States and Britain.

Pegasus, made by the Israeli firm NSO Group, can switch on a phone’s camera or microphone and harvest its data, and was at the center of a storm in July after a list of about 50,000 potential surveillance targets worldwide was leaked to the media. 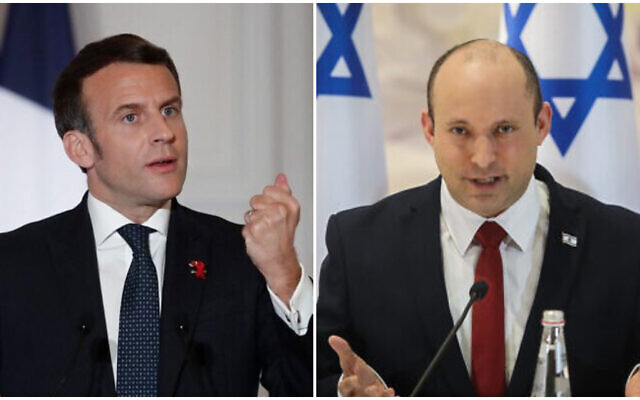 The media consortium behind the revelations, including The Washington Post, The Guardian and France’s Le Monde, reported at the time that one of Macron’s phone numbers and those of five French cabinet ministers were on the leaked list of potential targets.

In July, Le Monde reported that evidence of an attempted hacking was found on the phone of the former environment minister and close Macron ally Francois de Rugy, with the attempt allegedly originating in Morocco.

Morocco’s intelligence services were also accused of being behind the hacking of journalists in France, but the kingdom’s government has denied the claims and launched legal action alleging defamation.

The NSO Group has denied that Macron was among the targets of its clients.

We can “specifically come out and say for sure that the president of France, Macron, was not a target,” Chaim Gelfand, chief compliance officer at NSO Group, told Israeli television network i24news in July.

NSO has insisted that its software was intended for use only in fighting terrorism and other crimes, and the reported targeting list was not related to the company.

Last month, Foreign Minister Yair Lapid played down criticism of Israel’s regulation of NSO Group, but vowed to step up efforts to ensure the company’s controversial spyware doesn’t fall into the wrong hands.

Why more children are having high blood pressure –Cardiologists

Slain OAU Postgraduate Student’s Body Not In Our Custody – Police