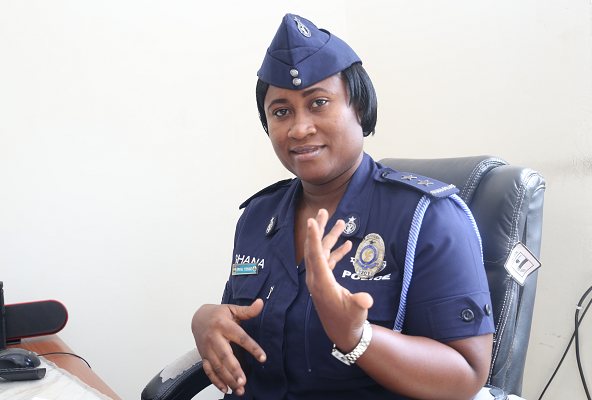 Police investigations into the death of a female resident in Ho-Fiave in the Volta Region has revealed that the deceased is not a Ghanaian.

Public Relations Officer of Volta Regional Police Headquarters, DSP Afia Tenge, interacting with JoyNews’ Maxwell Agbagba who has been keenly following the incident indicated that the victim is a Zambian.

She stated that the Service continues to engage the bereaved family in Zambia as it seeks to bring finality to the case.

The boyfriend to the deceased is currently the main suspect in this suspected murder case. It was reported that the police found the remains of the victim in a double-decker refrigerator at his house.

Neighbours who could no longer bear the stench emanating from his room on Monday, November 22, broke into his building, and there they found the remains of the deceased girlfriend.

Since this development, the deceased’s boyfriend has been at large. The Police say efforts have been doubled to locate his whereabouts.

“Though he may be running for now, he cannot hide forever. We will continue to ask members of the public as we have done. We have shared photos; we have been able to get from the crime scene.

We want to assure the Volta Region and the residents of Ho-Fiave that looking at the work we are doing with the crime officer, we hope to make some successes in some time to come.”

However, further investigations carried out by the police has confirmed that the suspect has multiple names. To some, he is Frank and to others, Emmanuel. Some documents accessed by the Service reveals that he bears the name Augustine Fiagbedzi.

“It looks like he has a number of names for what reason the police is yet to find out,” DSP Tenge told JoyNews.

It was earlier reported that the deceased and her boyfriend worked at the same institution but findings from the police reveal that only Emmanuel as referred by some, is an employee at a said hotel.

The victim who had a lot of time on her hand used to visit her boyfriend at his workplace, therefore, was well-known by other employees.

Also, neighbors of the suspect who spoke to the police have confirmed that he was in his residence three days prior to them finding out that his girlfriend was in a double-decker refrigerator on Monday.

The owner of the house where the incident happened and her children have been to the police station to issue their statement.

On Tuesday, personnel of the Police Criminal Investigations Department (CID) picked evidence of what they believe to be the burnt hair of the deceased and a rod used to control the burning at the backyard of the suspect.

Some of the clothes the suspect heaped on the body to conceal it were also soaked with blood.

Meanwhile, son of the landlady, Mathias Ajobley has revealed that the suspect demanded a spare key to his room which was then in the possession of his mother.

A few neighbours who spoke to JoyNews about the relationship that existed between the two said they often used to display affection in public.

“When I heard the news I was shocked. They always move quietly. They play their love very well,” one said.

Another added: “We perceived (them to be) twins because even when they come back from work, you (would) realise that the guy is in front and the girl is trying to jump (on his back) so that they come to the house.”