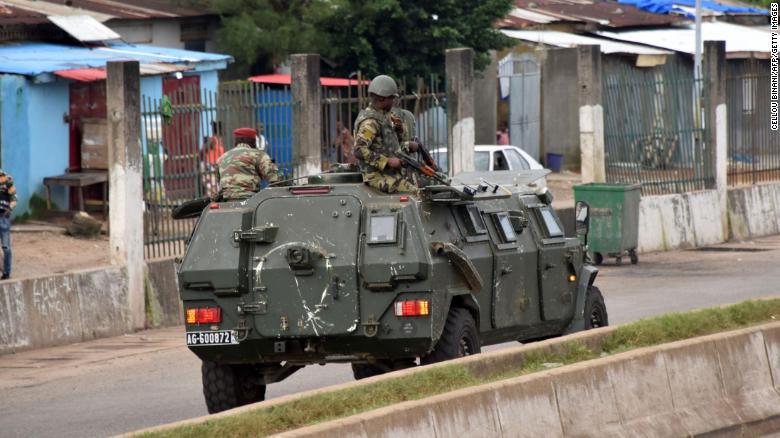 Members of Guinea’s armed forces drive through the central neighborhood of Kaloum, in Conakry, on September 5.

A Guinean military officer broadcast a statement Sunday announcing that Guinea’s Constitution has been dissolved in an apparent coup.

“We will no longer entrust politics to a man. We will entrust it to the people. We come only for that; it is the duty of a soldier, to save the country,” Guinean army officer Mamady Doumbouya says in the video.

An adviser to President Alpha Conde told CNN that Conde is under arrest and that a coup has taken place in the West African country.

It was not immediately clear where Conde is.

In the video, Doumbouya — wearing a special forces uniform — says that they have arrested Conde, suspended the constitution, the government and all other institutions. He also announced the closing of land and air borders.

The video has been widely circulated and reported by local media.

Gunfire erupted Sunday in Conakry, the capital of Guinea, in what appeared to be a coup attempt, according to multiple social media postings and witnesses on the ground who spoke to CNN.

Heavily armed soldiers were present in Conakry’s Kaloum area, the site of many government buildings, according to videos shared on social media.

Earlier in the day, the British Embassy in Conakry warned that there was “sustained gunfire in several locations of Conakry” and asked people to remain vigilant and avoid movement.

“It is time for us to understand each other, to join hands, to sit down, to write a Constitution that is adapted to our realities, capable of solving our problems,” Doumbouya said in the video.

CNN has not independently verified the authenticity of the videos.

United Nations Secretary General Antonio Guterres called for Conde’s release, as reports of the apparent coup unfolded. “I am personally following the situation in Guinea very closely. I strongly condemn any takeover of the government by force of the gun and call for the immediate release of President Alpha Conde,” Guterres said in a tweet Sunday.

Conde won the presidency in 2010, taking control from a military junta that had been in power since 2008. The 2010 presidential elections were the first in the republic’s 52-year history.

The apparent coup attempt in Guinea follows a successful coup in Mali in August 2020, where the military forced out the elected government.

Maha: Now, full vax must for all public transport

Sports ministry warns football may not ‘survive’ in France