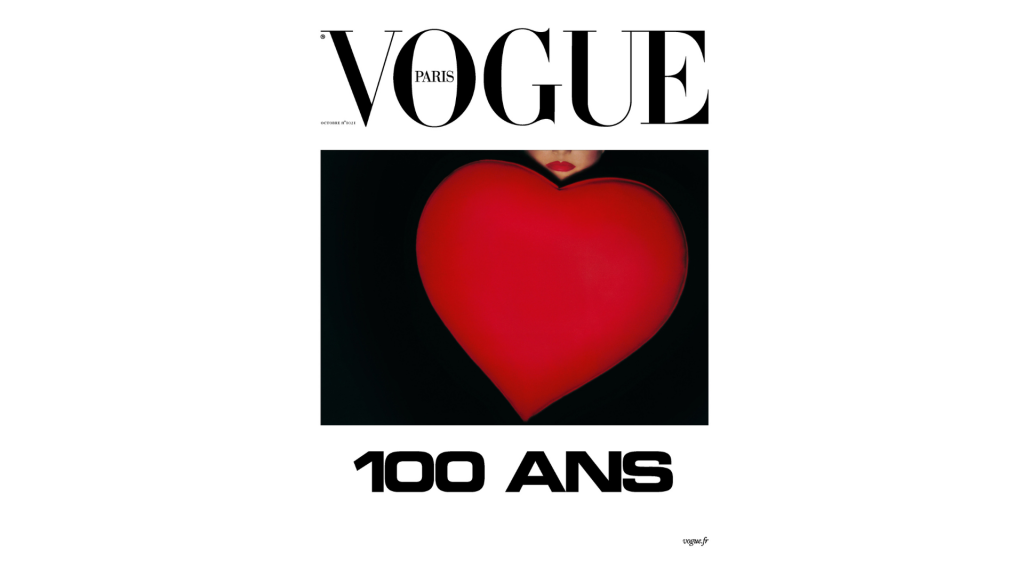 100 YEARS YOUNG: Delayed a year due to the COVID-19 pandemic, the issue celebrating 100 years of Vogue Paris will hit shelves on Sept. 28, a few days before the opening of the “Vogue 1920-2020” exhibition at the Palais Galliera.

The cover, an April 1979 Guy Bourdin photograph featuring a bold red heart with Vogue Paris and “100 ans” (or “100 years”) in gold foil, was chosen as an echo of the issue’s central idea that “archives [are] the heart of a magazine, its spine, its words that remain for eternity. They are its voice, its confidences, its deep secrets that they share with you,” the team said in a statement.

Opening the issue is an editorial note by former editor in chief Emmanuelle Alt — who exited last summer as part of Conde Nast’s shakeup of its global editorial ranks — followed by a text initially published in the January 1945 issue that was written by Germaine Beaumont, a French journalist who was the first woman to win the esteemed Prix Renaudot literary prize.

“It was the first post-World War II editor’s letter and we found that the title ‘Repirer’ [or ‘Breathe’] to be very apropos with what we’re living today. It was one of many coincidences,” said Sylvia Jorif, the magazine’s features editor, who explained that this deep dive into the archives had yielded surprises even for those who knew the magazine well, like 20-year veteran Alt.

Considered the true finale to Alt’s decadelong tenure, issue 1021 is mainly composed of archival material, punctuated with columns by Parisian cultural fixtures like Musée des Arts Décoratifs director Olivier Gabet and author Jérôme Gautier, currently director of editions at Dior Haute Couture, who pens a column on archives and their meaning as a way of elegantly retracing — and occasionally glossing over — episodes of the magazine’s century of existence.

“We decided to use only [archival material], laying it out more in the manner of a book than a magazine, with topics organized by some of the defining themes of the magazine,” explained Jorif, who pointed out that texts written by French literary icons Simone de Beauvoir, Françoise Sagan and Jean Cocteau had been reproduced “in their truth” to give a sense of the physicality of the magazine’s identity and as “testaments of their time.”

Paris, of course, has pride of place in the magazine as well. “What is fascinating and what is very instinctive throughout the magazine is the idea that the best backdrop for Vogue Paris is the city itself,” said Jorif, who penned a piece on the symbiotic relationship between the publication and its titular home.

The issue also highlights the work of photographers famously associated with the magazine, such as Helmut Newton; Guy Bourdin “who contributed to shaping its identity and its spirit,” and Irving Penn, who captured the portraits of French celebrities and anonymous Parisians, in a marked departure from his work for American Vogue.

Other chapters focus on beauty, jewelry and “the eye of Vogue,” which explores the French magazine’s provocative outlook, including a Terry Richardson editorial casting Eva Herzigova as a victim of domestic abuse, or a 2003 Inez & Vinoodh editorial with nude models standing at the bar alongside flabbergasted early morning punters.

Along with the magazine, a supplement entirely dedicated to Saint Laurent casts a light on the French magazine’s “long-standing significant other. It was a perfect cohesion not only with Yves Saint Laurent himself since 1962, but also the designers who took up the mantle after his departure. After all, the most famous picture of Monsieur Saint Laurent with two girls in the street is from Vogue Paris,” Jorif said.

The 420-page issue and its supplement are priced at 6.90 euros, and will remain on sale for two months. The following issue, dated November 2021, will be the first helmed by editorial content director Eugénie Trochu.

André Leon Talley Tribute Is Still in the Works

Everything You Need to Know About the Beijing Winter Olympics

Ghana to participate in 2022 Soccerex Americas

“Important To Fold And Leave The Table”: Ravichandran Ashwin Reacts To Brendan Taylor’s Confession About Being Approached By Bookies

Joshua Denies £15m Pay-Off To Step Aside For Fury-Osyk