“First, we would like to underscore our grave concern by the information in the Director General’s report that IAEA inspectors operating in Iran have, for several months, been subjected to intimidation through excessively invasive physical searches,” the UK’s Ambassador to the IAEA Corinne Kitsell said in a statement on behalf of the countries. “This is unacceptable and unprecedented.

“We express our full support for IAEA inspectors who carry out their roles with impartiality, professionalism, and dedication and must be able to undertake their duties without fear of intimidation.”

In September, the Wall Street Journal reported that Iranian guards sexually harassed inspectors from the UN’s nuclear watchdog at the country’s Natanz nuclear facility multiple times. The incidents included inappropriate touching of female inspectors by male security guards as well as orders from the latter to remove some clothing, the report said, citing unnamed diplomats. At the time, the International Atomic Energy Agency confirmed the inappropriate conduct in a statement but did not get into details.

The statement by the European powers followed a visit to Iran by the head of UN nuclear watchdog.

Rafael Mariano Grossi warned Wednesday his inspectors are close to being unable to “guarantee” they know what’s going on at all of Iran’s nuclear sites. 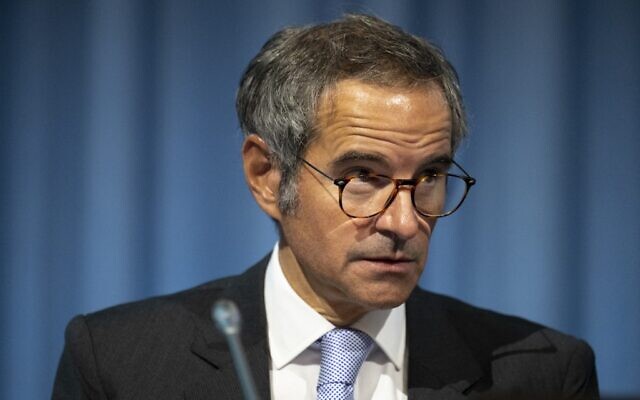 In this file photo, taken on September 20, 2021, Rafael Grossi, director general of the International Atomic Energy Agency (IAEA), attends the IAEA General Conference, an annual meeting of all the IAEA member states, at the agency’s headquarters in Vienna, Austria. (Joe Klamar/AFP)

Grossi’s words sharply contrasted with the optimistic tone his Iranian hosts offered the day before. They signal the Islamic Republic’s harder line as renewed talks over Tehran’s tattered nuclear deal with world powers resume next week.

They also represent a stark alarm for nuclear nonproliferation experts after Grossi’s trip to Tehran produced no breakthrough to restore its ability to fully monitor its program.

The International Atomic Energy Agency’s inspectors remain unable to access surveillance footage and face greater challenges in trying to monitor Tehran’s rapidly growing uranium stockpile, some of which is now enriched up to 60% purity — a short technical step from weapons-grade levels of 90%.

“Our negotiations have been inconclusive, meaning that we could not finish,” Grossi told reporters in Vienna, where the IAEA is based, after addressing the agency’s board of governors. “I’m not giving up on trying to find some understanding, but in terms of what we were discussing yesterday, we could not conclude an agreement.”

Pressed on whether any progress had been made, Grossi said that “in terms of the substance, no, quite clearly, we were not able to make progress.” However, he said that having got to know the new Iranian officials was “a positive element” and “this will certainly help.” 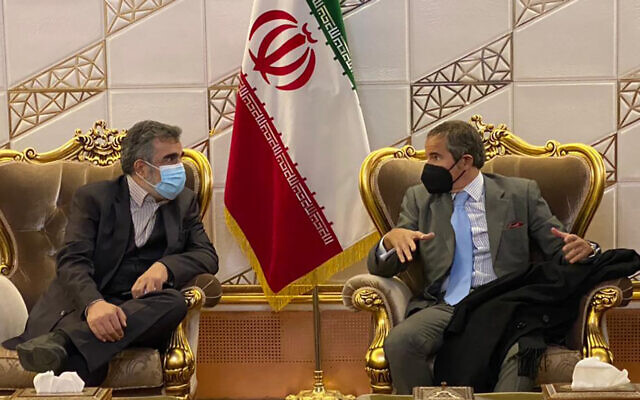 But he warned: “We are close to the point where I would not be able to guarantee continuity of knowledge.” He did not specify a timeframe, but said a long lack of access to a centrifuge parts production site near the northern city of Karaj “would at some point prevent me from continuing to say that I have an idea of what is going on.”

On Tuesday, Grossi went to the Atomic Energy Organization of Iran, the country’s civilian nuclear agency, and met its new head, Mohammad Eslami. He also met Foreign Minister Hossein Amirabdollahian, who said Iran was determined to have “constructive engagement” with the IAEA to “improve mutual trust and cooperation,” according to a report by the state-run IRNA news agency.

Under a confidential agreement called an “Additional Protocol” with Iran, the IAEA collects and analyzes images from a series of surveillance cameras installed at Iranian nuclear sites. Those cameras helped it monitor Tehran’s program to see if it is complying with the nuclear deal.

Iran’s hard-line parliament in December 2020 approved a bill that would suspend part of UN inspections of its nuclear facilities if European signatories did not provide relief from oil and banking sanctions by February. Since February, the IAEA has been unable to access imagery from the surveillance cameras.

Under the deal, the IAEA also placed around 2,000 tamper-proof seals on nuclear material and equipment. Those seals communicated electronically to inspectors. Automated measuring devices also provided real-time data from the program. Inspectors haven’t been able to access that data either, making the task of monitoring Iran’s enriched uranium stockpile that much more difficult.

The agency also has sought monitoring of activities at the centrifuge parts production site near Karaj. The IAEA has had no access there since June after Iran said a sabotage attack by Israel considerably damaged the facility and an IAEA camera there.

Grossi on Wednesday insisted that, despite this week’s lack of progress, a solution has to be found. “We must reach an agreement,” he said. “We must do it.”

Senior diplomats from Britain, China, France, Germany and Russia plan to meet Iranian officials in Vienna on November 29 to discuss bringing Tehran back into compliance with the 2015 deal known as the Joint Comprehensive Plan of Action, which eased sanctions on Iran in return for curbs on its nuclear program. The talks could pave the way for the US to rejoin the accord.

The United States pulled out under former President Donald Trump and reimposed sanctions on Iran, prompting Tehran to abandon all the limits the deal placed on it. That has raised tensions across the wider Mideast as Israel has warned it won’t allow Iran to be able to obtain a nuclear weapon.

In an interview with NPR, US  Special Envoy for Iran Rob Malley warned that America won’t “sit idly by” if Iran gets “too close for comfort” with advances in its nuclear program.

“They are getting very close to having enough fissile material, if they chose to enrich, at weapons grade for a bomb,” Malley told the broadcaster. “How close they are to a bomb has to do with weaponization, and there they are … further away.

“But again, we’re not going to wait and see them get so close, and we hope that this could be resolved diplomatically and it should be.”

Nigerians react to photo of Pete Edochie and his first son